As soon as derivatives estimated from experimental data are involved, comes the question whether the contaminating noise is a problem to safely compute derivatives from such data. The answer depends on the way derivatives are estimated. Using Euler scheme or finite difference scheme leads to a negative answer, mainly because the noise contamination is very quickly amplified from one derivative to the other. Using Legendre polynomials as discussed in [1] provides slightly better results but, we observed a significant improvement in the use of derivative coordinates when locally fitted polynomials were analytically derived. Such a technique presents the great advantage to spread the noise contribution in a homogeneous way in all the coordinates. Moreover, successive derivatives share a coherence that other methods do not provide. For instance, in the case of Legendre polynomials, each derivative is estimated independently, a property not recommended for global modelling.

This method was never published before this recent paper about Frequently Asked Questions about global modelling [2].

recorded in the copper electrodissolution experiments is here shown. It was produced with the Fortran code you can download from this page with the parameters left in the code. In fact the model we got from this experiments was obtained with derivative using Legendre polynomials [3]. This is only later that Loïs Le Sceller developed this procedure to compute derivatives [4]. Then, this was applied to a velocity component of the flow in a mixing tank [5], a Belousov-Zhabotinsky reaction  [6] and the Lynx population [7]. 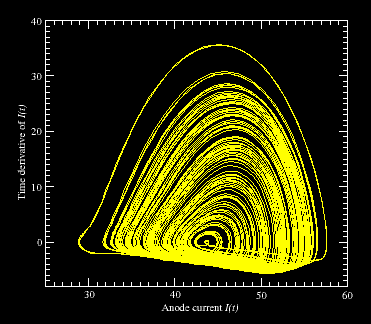 Differential space from the copper electrodissolution