In order to investigate some bifurcations which can lead to turbulence, William F. Langford constructed a model designed for producing toroidal chaos [1]. His objective was to investigate with a numerical approach the bifurcations that occur after the first appearance of an invariant torus. The particular interest of this model is that it is three-dimensional. It reads as

this system produces a toroidal chaotic attractor shown in Fig. 1. 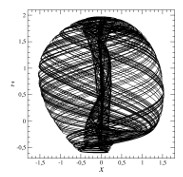 A poincaré section (Fig. 2) reveals some foldings characteristic of chaos on a torus, as described in the Curry-Yorke scenario [2]. 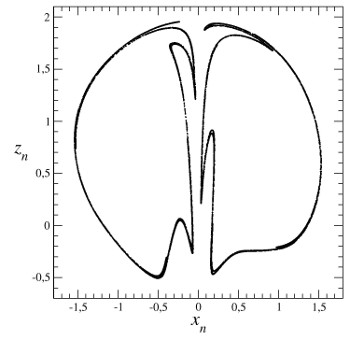 A similar system was used to describe the dynamics observed in a Taylor-Couette flow  [3].