Edwin Henry Colpitts (1872-1949) was the chief of the research branch for the Western Electric. He contributed to the development of the thermionic vacuum tube as an amplifying element in a telephone repeater for radio telephony. In 1915, Colpitts proposed an oscillator using capacitive coupling (Fig. 1) as an alternative to the inductive coupling used by the oscillator invented by his colleague Ralph Hartley. He patented this oscillator [1] and only published this circuit few years later with Edward Craft [2]. He published a review paper on carrier multiplex telephony and telegraphy [3]. He and his co-workers achieved significant advances in the development of an oscillator, now known as the Colpitts oscillator. The theoretical circuit and the circuit to use in practice the Colpitts oscillator are shown in Figs 1a and 1b, respectively (these circuits are reproduced from [4]).

A chaotic attractor produced by a Colpitts circuit was found in 1994 by Michael P. Kennedy [5]. He was motivated in doing this by a statement in Nhat Nguyen’s Ph.D. Thesis [6] according which multioscillations "is a phenomenon in which two or more oscillations exist simultaneously in the steady state. In other words, there are parasitic or unwanted oscillations existing together with a main oscillation. Due to the multiple oscillations, the resultant steady-state signal is severely distorted and hence has limited application in communication systems." The Colpitts circuit was found to be described by the adimensional model [7]

, x is the voltage at C1, y at C2, and z is the current across the inductance L. Parameters are

is the resonant frequency of the unloaded LC-circuit and g is the loop gain of the oscillator.

A chaotic attractor is found for

A first-return map to this Poincaré section presents three monotonic branches, one increasing and two decreasing branches (Fig. 2b). 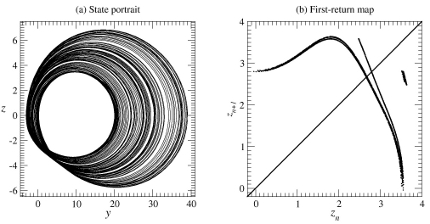 The smooth maximum between the increasing and the first decreasing branches implies that the route to chaos is a period-doubling cascade (Fig. 3).