The Blazhko effect is a long-term, generally irregular modulation of the light curves that occurs in a sizeable number of RR Lyrae stars (Fig. 1). This effect was discovered in 1907 by Serguei Blazhko (1870-1956) [1].

Fig. 1 : Blazhko effect as measured by the Kepler spacecraft.

Numerical hydrodynamical simulations [2] were able to produce alternating cycles, and the ancillary analyses established that the 9:2 resonance is the cause of symmetry breaking bifurcation. However, these hydrodynamical simulations were unable to produce either regular or irregular Blazhko-like modulations. An amplitude equation was thus developed by Robert Buchler and Zoltan Kollath who thus proposed the set of three-differential equations [3]

where x and y are the real amplitude of two interacting mode in a 9:2 resonance and where the phase between these two modes is designated by z. For parameter values

and initial conditions x0=0.7, y0=0.1 and z0=2.4, a chaotic attractor (Fig. 2) is found. Its first-return map (Fig. 3) is a double cusp map. The layered structure comes from the fact that there is no symmetry in this system and the two "leaves" does not superpose exactly. This is one of the very rare system with a cusp map found in a non symmetric system. The other one was proposed by Otto Rössler in 1978. 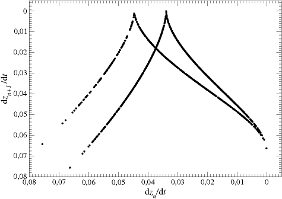 Fig. 3 : First-return map to a Poincaré section of the "Blazhko" attractor