Christophe LETELLIER 11/01/2008
University of Tübingen, Germany
From the origin of Life to the architecture of Chaos 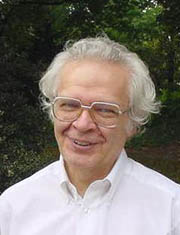 With Henri Poincaré and Edward Lorenz, Otto E. Rossler is among those who contribute to build the frame of a paradigm. Investigating Otto’s contribution in the second half of the seventies reveals a particularly rich view of what the chaos theory was and still is ! Indeed, Otto got the many relevant points with his "naive" view of the concepts. Our aim in this collaboration is to revisit all these background and to provide a "determinist but impredictible" explaination of the path Otto followed to reach his well-known 3D system, the so-called Rössler system.We are preparing a book with a selected sets of his papers published in the 70’s. Comments by Otto about his own approach as well as technical and historical notes will be included.

In the 1970, Otto Rössler introduced a few simple sets of ordinary differential equations as examples showing different types of chaos. Most of them are now more or less forgotten with the exception of the so-called Rössler system published in Physics Letters A, 57 (5), 397-398, 1976. In the present paper, we review most of the original systems and classify them using the tools of modern topological analysis, that is, using the templates and the bouding tori recently introduced by Tsankov and Gilmore in Physical Review Letters, 91 (13), 134104, 2003. Thus, examples of inequivalent topologies of chaotic attractors are provided in modern spirit.