What torn unimodal chaos is ?

It is known that for producing a chaotic behavior, sensitivity to initial conditions is combined to some recurrence properties. These two specific characteristics result from two mechanisms : stretching and squeezing. This can be produced by a folding or a tearing. Typically, an attractor involving a folding is produced by the Rössler system and one involving a tearing is the Lorenz system. These two mechanisms were investigated in [1]. Torn Unimodal chaos corresponds to an attractor with a tearing mechanism that is characterized by a cusp --- or a Lorenz --- map. The Lorenz system is a good example but it has a rotation symmetry. The purpose here is to have an attractor with a tearing mechanism without any symmetry.

To the best of our knowledge, the first set of equations that was identified to produce a chaotic attractor bounded by a genus-1 torus and possessing a Lorenz map was proposed by Otto Rössler and Peter Ortoleva from Indiana University [2] as an isothermal abstract reaction system. The systems reads : 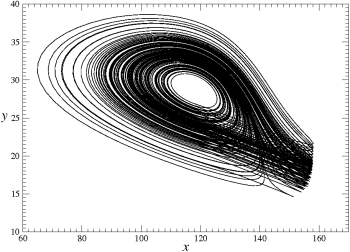 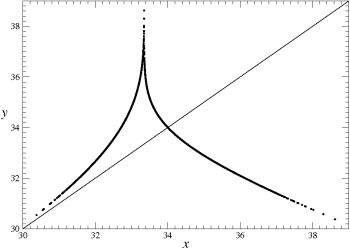