A property of dynamical systems which can complicate the analysis of chaotic behavior is a weak energy dissipation. As a consequencec, there is no rapid relaxation of trajectories to a band whose thickness can be neglected (as it occurs for the Rössler system). In this case, extracting a branched manifold from the data is not an easy task and an analysis using symbolic dynamics can be astonishingly complicated because of the difficulty of defining a good partition for the attractor. Edward Lorenz has proposed an example of this, as he was common to, in the field of meteorology. In 1984 this pioneer proposed a three-dimensional model that could claim to be the simplest model for global atmospheric circulation. 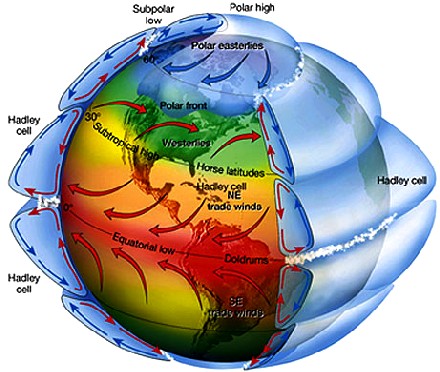 This system is made of three ordinary differential equations

The parameters are chosen such as

[1]. This system has for solution a fairly complicated attractor as shown in Fig. 2.

A Poincaré section reveals the complexity of this model (Fig. 3). One sees that not only is the Poincaré section thick but it is also flakey. These properties are responsible for the difficulties encountered in describing the structure of this attractor. One of the difficulties resides in the absence of simple criteria for constructing a partition for this attractor and, as a result, for constructing a good symbolic dynamics. In fact, periodic orbits cannot be identified and it is not easy to propose a branched manifold. At present we are faced with the impossibility of describing weakly dissipative phenomena in terms of bands that are stretched and folded on themselves. 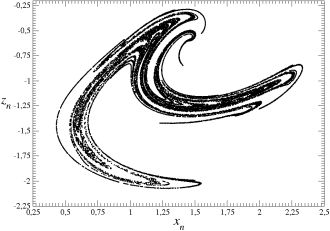