1982 A model for plasma instabilities

In certain plasma experiments, the plasma is maintained as long as the instability saturation implies a small growth rate of instabilities ; perturbations are still mainly governed by a few linear modes. Chaos was produced with an elementary model based on qaudratic interaction between two modes [1]

Here the nonlinear decay of a linearly unstable high-frequency wave into a linearly damped low-frequency one. These two waves are governed by a growth and a damping rates and the quadratic coupling V. There is a frequency mismatch

The complex mode amplitudes are governed by the equations

After a coordinate transformation, the equations governing the wave amplitudes x and y, and the relative phase z are [2]

When the mismatch is

and varying the ratio between the growth and the damping rates, a period-doubling cascade is observed as the route to chaos (Fig. 1).

Fig. 1. Bifurcation diagram versus the ratio between growth and the damping rates.

a chaotic attractor can be obtained (Fig. 2). Its shape is very sharp and it is useful to use a differential embedding to represent the dynamics. When induced by variable z (left panel of Fig. 2), the state portrait looks like a Rössler attractor represented in a differential embedding induced by variable z. A better representation of the dynamics can be obtained by using the variable s = log (z) as shown in the right panel of Fig. 2.

Fig. 2. Chaotic attractor produced by the simple model with quadratic interaction of waves.

which is smooth and unimodal as expected after a period-doubling cascade (Fig. 3). 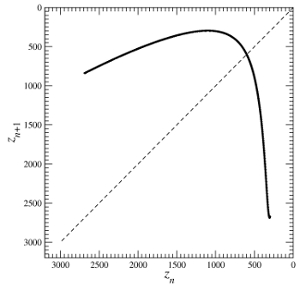 The original purpose of the work by Claude Meunier, Marie-Noëlle Bussac and Guy Laval, by then at the Ecole Polytechnique (Palaiseau, France), was to show that intermittency was possible in plasma. This is can be easily checked with

that is, just before the period-3 window. A typical time series of variable z is shown in Fig. 4.

The existence of a small channel between the first bisecting line and a return map can be exhibited by using a third-return map to the Poincaré section, as shown in Fig. 5. 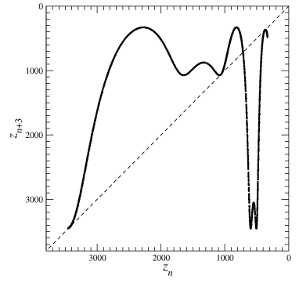 Fig. 5. Third-return map to the Poincaré section in the type-I intermittent regime, just before the period-3 window.

[1] S. Y. Vyshkind, Occurrence of stochasticity in the case of nondegenerate wave interaction in media with amplification. Radiophysics and Quantum Electronics, 21 (6), 600-604. 1978.