1986 The Nosé-Hoover system (Sprott A system)

Shūichi Nosé [1] and by William Hoover [2], [3] investigated a system of N particles (d degrees of freedom) in a given volume V and interacting (heat transfer) with an external system in such a way that the energy E is conserved. The equations governing the coordinates Q, the momentum P and the effective mass s, after a coordinate transformation, were

which were rediscovered by Julian Clinton Sprott [4] as the Sprott A system. This system is a conservative system as shown by its Jacobian matrix

with a trace that has for mean value

Depending on initial conditions, the solution can be a chaotic sea, a quasi-periodic motion or a periodic orbit as evidenced by the Poincaré section 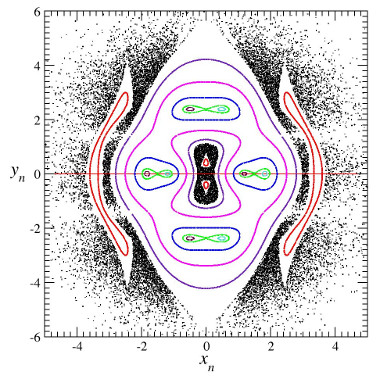 Fig. 1. Poincaré section of the Sprott A system.

The chaotic sea is mainly structured around the four islands corresponding to a period-4 orbit (Fig. 2). 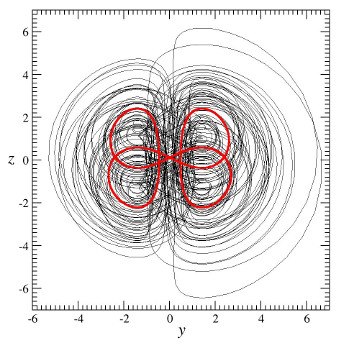 which has for Jacobian matrix

with a mean trace equal to -(b+c). With a=1, b=0, and d=1, a bifurcation diagram is computed versus parameter c, from c=0 associated with a conservative dynamics to c=1 corresponding to a strongly dissipative case (Fig. 3). The conservative case corresponds to the Sprott A system and the strongly dissipative case is just a "Lorenz-like" dynamics with a chaotic attractor topologically equivalent to the Lorenz attractor. As seen in the bifurcation diagram, there is not a continuous transition between the chaotic sea (c=0) and the Lorenz-like attractor (c=1). There is a huge window with period-1 limit cycle and a crisis at c=0.6. Along this line of the parameter space, there is no chaotic attractor with a weakly dissipation rate.

Fig. 3. Bifurcation diagram from a conservative to a dissipative dynamics.