An important general problem of plasma physics is that of determining the nonlinear state resulting from a linear instability. One of the elementary processes by which instability saturation can occur is resonant three-wave coupling of energy in the linearly unstable spectrum to waves which are linearly damped. One of the simplest models of this process is associated with the normalized equations governing three interacting waves

with complex amplitudes Ci and where time is normalied to the growth rate of the first wave which has the highest frequency. Amplitudes are normalied too.

When the damping rate of the second and of the third waves are equal, and with an appropriate coordinate transformation, the governing equations can be rewritten in the form [1]

which only depends on two parameter values. As used by Jean-Marie Wersinger, John M. Finn and Edward Ott, we set

and the other parameter is varied. The obtained bifurcation diagram is shown in Fig. 1.

It reveals that the route to chaos is a period-doubling cascade. The most developed unimodal map can be obtained between the two period-3 windows. After the second window, the a third branch is observed in the first-return map. A smooth unimodal chaos is observed, for instance, for

leading to a state portrait whose better plane projection is spanned by variable y and its derivative (Fig. 2, left). The folding arises in the squeezed left side of the attractor : using log y helps to improve its observability (Fig. 2, right).

Fig. 2. Plane projections of the state portrait for the smooth unimodal chaos.

The most developed smooth unimodal map is computed for 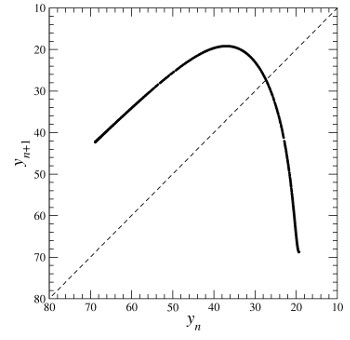 system can be rewritten as [2]

This system does not belong to the class of Lorenz-like systems, particularly because the rotation symmetry is broken. It therefore produces a different dynamics than the Rabinovich system obtained in 1978 in a similar context.