In the early 70s, Igor Gumowski and Christian Mira studied families of maps obtained by applying a dissipative perturbation to a conservative map. These investigations were related to the problem of ``stochastic’’ instability in accelerators and storage rings [1]. Among these two families, there is a two-dimensional quasi-conservative map which may be written as

where parameters values were

Fig. 1. Chaotic solution to the two-dimensional quasi-conservative map. Initial conditions x0=0.01 and y0=0. These two pictures were similar to those published in 1973 and 1980.

Another beautiful attractor can be obtained with a different set of parameter values : Christian Mira named it Mythic Bird (Oiseau mythique in French). It is plotted in Fig. 2 with parameter values as follows. 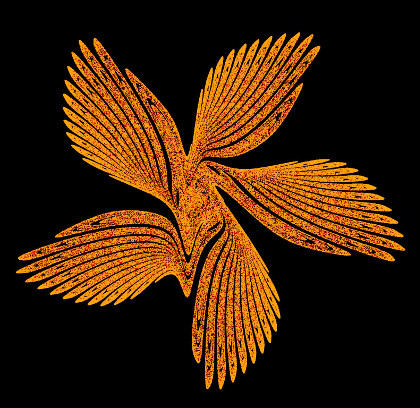 Other beautiful plots can be found in [4]

The Mythic bird appears in a picture shot by Jean Dieuzaide at the Laboratoire d’Analyse et d’Architecture des Systèmes LAAS (Toulouse), in 1973. Jean Dieuzaide was a photographer who started his career right after the Second World War (member of the groupe des XV), his production reveals a wide set of topics. Among his most well known pictures, Salvador Dali but also the Général de Gaulle. He got the two most important French prizes in photography : the first Niépce prize in 1955 and the Nadar prize in 1961. In 1974, he created the first permanent French gallery devoted to photography at Le chateau d’eau (a water tower built in Toulouse in 1825). Most of his pictures are managed by the Fonds Dieuzaide. 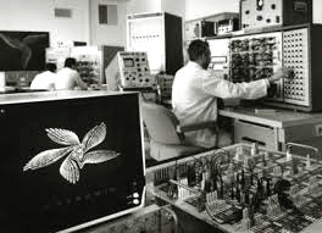