The transmitted light by a Fabry-Pérot cavity containing a two level absorbermay produce some complex fluctuations. Kensuke Ikeda (Ristumeikan University, Kusutsu, Japan) found that when the detuning of the incident light with the absorber is taken into account, the transmitted field presents a chaotic behavior [1]. The device of the ring cavity is shown in Fig. 1. EI is the incident field, ET the transmitted field and, ER the reflected one. L is the length of the sample cell containing the two level absorber. Mirrors 1 and 2 have a partial reflectivity R while the mirrors 3 and 4 have total reflectivity. The difference equations proposed by Ikeda were then normalized  [2].

When the saturable absorption is ignored, the field

is governed by the difference equation [3]

Parameters of this equation are

With parameter values R=1, C1=0.4, C2=0.9 and C3=6, a chaotic behavior is obtained as shown in Fig. 2. With these parameter values, the so-called Ikeda map can be viewed as a nice example illustrating the "Horseshoe map" introduced by Stephen Smale [4]. 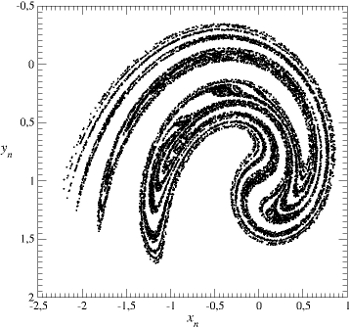 [1] K.Ikeda, Multiple-valued stationary state and its instability of the transmitted light by a ring cavity system, Optical Communications, 30, 257-261, 1979.