What Topological Analysis is ?

A trajectory that satisfies a deterministic set of equations and that starts from a prescribed initial conditon can exhibit bizarre behavior. Plots of such trajectories in the phase space are called strange attractors or chaotic attractors. A useful working definition of chaotic motion is motion that is: 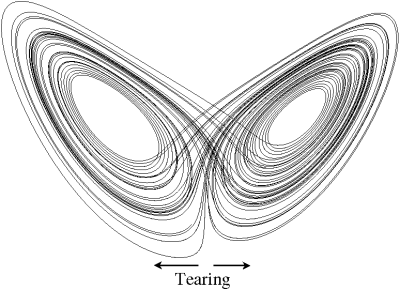 Fig. 2: A chaotic attractor produced by a tearing mechanism

These two chaotic attractors "look different". Is there any way to show that they really "are different"? Obviously, their dimensions are too close to provide any useful indication about their structure [1] [2]. The only sensible way to define "different" is in a topological sense. More precisely, two chaotic attractors are ’’equivalent’’ (or ’’isotopic’’) if one can be deformed continuously into the the other simply by deforming the space in which they live: discontinuous processes such as tearing, gluing, or surgery (tearing and gluing) are not allowed. If two attractors are not equivalent in this topological sense, they are "different".

How to determine the equivalence or inequivalence of two chaotic attractors is yet another miracle of topology. Associated with every chaotic attractor there are periodic orbits. There is an infinity of such orbits; they are countable and are all unstable. This follows from a simple intuitive argument. If you follow a chaotic trajectory long enough it will come back to the neighborhood of its initial position (Poincaré’s "recurrent but not periodic" property). If you perturb the initial condition just the right way, the perturbed trajectory will close up to form a periodic orbit. This periodic orbit is not stable; otherwise the initial condition would have relaxed to this orbit.

In three dimensional space an integer invariant can be associated to each pair of closed orbits. This invariant is the Gauss Linking Number. It is defined by an integral

This integral expression is applied to two closed orbits

, with the condition that the two closed orbits share no point in common:

for any values of

. It is remarkable that this integral, which appears to be of geometric origin, always has integer values - which is a signature of topological origins.

In practice, it is often simpler to compute

by projecting the two closed curves onto a planar surface and counting the number of times their projections cross. The crossings carry a sign,

, depending on which segment is closer to the observer in the projection and the directions in which the projected segments cross. This will be made explicit below.

The Gauss Linking Number between two orbits remains unchanged while the orbits are disjoint: it can only change when a segment of one orbit crosses through a segment of the other orbit. At such points

and the integral fails to exist. Such crossings cannot occur for the orbits "in" chaotic attractors because the crossing point would then have two futures, one associated with each periodic orbit. This violates determinism.

From each chaotic attractor we can extract the unstable periodic orbits, and for each distinct pair we can compute the Gauss Linking Number. To be equivalent, two chaotic attractors must have not only a 1:1 correspondence between their unstable periodic orbits, but the Linking Numbers of corresponding orbits must be the same. These ideas are illustrated in Figs. 1 and 4. These figures show the projections of two chaotic attractors onto the x-y planes in their respective phase spaces. Chaotic behavior is produced by stretching and folding in both cases. This is confirmed by the shape of the first return map onto a Poincaré section for each of the attractors.

A Poincaré section is a surface that the trajectory intersects "each time around". For the Rossler attractor the surface is the half plane parallel to the

cst. with one edge going through the hole in the middle of the attractor. For the other attractor the Poincaré section is defined similarly. The Poincaré sections are indicated by the red line segments in Figs and . For plotting them, both the

coordinates are recorded each time the trajectory intersects the Poincaré section.

In the cases shown in Figs. 1b and 4b the first-return map is a plot of the next value of x as a function of the previous value:

. Although these curves have a fractal structure, the fractals are so thin they look like simple one-dimensional curves. The parabolic nature of the maximum of the first return map is a signature that the mechanism that produces chaotic behavior is stretching and folding, not tearing and squeezing.

Segments of trajectories in the chaotic attractor that are good approximations to unstable periodic orbits can be located using first return maps. The sequence of value

times around the attractor. If this trajectory does not almost close up before p periods, the segment of the chatoic trajectory starting at

is used as an approximation for an unstable orbit of period

. This is a simple way to locate unstable periodic orbits in a chaotic attractor. The intersection of the first return map with the diagonals

in Figs 1b and 4b easily locates the period one orbit(s). Two unstable periodic orbits are plotted in Figs 1c and 4c for each of the two attractors.

Each orbit has been given a name. The name is determined by the order in which the orbits occur in the first return map. That is, each of the two branches of the first return map has been given a name: 0 for the ascending branch with slope >0 and 1 for the descending branch with slope <0. The two branches are separated by a maximum where the slope is zero. The assignment of a discrete sequence of a small number of symbols to a continuous trajectory is called ’’symbolic dynamics’’. Symbol sequences related by cyclic permutations describe the same orbit: for example the symbol sequences 1011, 0111, 1110, and 1101 describe the four different periodic points of a single period-four orbit. Periodic orbits of the Rössler attractor are described using a symbolic dynamics in [3].

Linking numbers are computed by counting signed crossings and dividing by two. At each crossing the tangent vector at the upper segment is rotated through the smallest angle into the tangent vector to the lower segment. If the rotation is right-handed the crossing is assigned the index +1 ; if it is left-handed the crossing is assigned the index -1. The Gauss Linking Number of the two orbits is half the sum of the signed crossing indices.

. The linking numbers for three corresponding orbits in each of the two attractors is shown in Tab. 1.

An extended version of this article written with Robert Gilmore & Marc Lefranc is available at Scholarpedia. Many details about topological characterization can be found in [4] or in my Ph’D thesis (in French).