In his research for simple quadratic chaotic systems, Julian Clinton Sprott collected more than 20 systems [1]. Most of them produce Rössler-like chaotic attractors [2]. We choose — quite arbitrarily — to include the Sprott H system that is rewritten in the form

where a=0.5 and b=1. This system produces a chaotic attractor that is topologically equivalent to the Rössler attractor (Fig. 1). 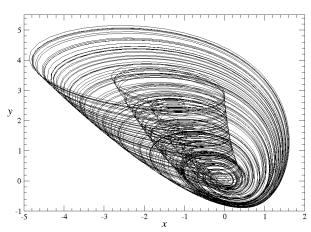 s. There are three columns that are associated with the time evolution of x, y and z, respectively.

The observability coefficients for the Sprott H system are

, that is, variables can be ranked as

according to the observability they provide for the attractor.