Chaotic attractors characterized by a spiral chaos, that is, by a smooth unimodal chaos without global torsion, are almost all associated with a branched manifold made a of ``normal’’ strip in the center of the attractor and a Möbius strip at its periphery. Nevertheless, it is possible to invert the relative organization of the two strips, with the Möbius strip at the center of the attractor. This was initially found by Normann Kleiner, Sebastian Fischer and Dieter Fr\"ohlich [1]. The governing equations are 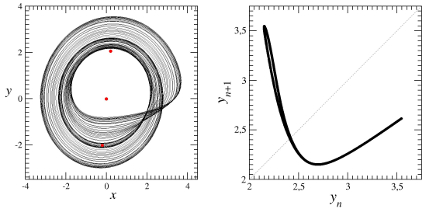 There is a water seesaw corresponding to this type of chaos. Such a seesaw is shown in Fig. 2 [2]

Fig. 2. Sketch of the water seesaw.

The water flows into the vessel V until the seesaw lowers and the vessel fills again with water until the seesaw tilts again, etc. To prevent the seesaw from striking backwards, there are two magnets M1 and M2 on the opposite side of V. The balance weight W can be moved back and forth on the rocker to control the movement of the rocker. If you move W from the right end of the bar towards the center, the rocker starts to swing evenly at a certain position of W. If you push W a little further, the vessel V tilts earlier and more slowly, so that more water flows out. Then it tilts back higher because there is less water in V. Now it tilts again, but this time with great momentum, because it contains more, then it flips back, tilts earlier, etc. The same state is thus reproduced every two oscillations. If you push the balance weight W even further into the middle, the seesaw describes a period-4, period-8, period-16 orbit... Then there is an aperiodic movement --- the seesaw moves chaotically (Fig. 3). Suddenly there is a periodic oscillation : this is the so-called period-3 window. 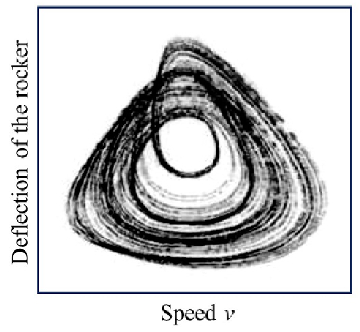