From Nonlinear Dynamics to BioMedicine

ATOMOSYD group from CORIA - Université de Rouen - is involved in the applications of nonlinear technique to BioMedicine, particularly on the cardio-respiratory system. To develop a common langage and a unified methodology between physicans and physicists, a summer school will be organized in Rouen in September 2009. Our aim is to provide a background in nonlinear dynamics that can be directly applied to biomedical data and to provide a minimum background in physiology concerning the cardio-respiratory system and the brain activity. The main target is the investigation of electrocardiograms, electroencephalograms, and breathing patterns. Roughly, lectures in nonlinear dynamics will be given in the morning, and lectures in biomedicine in the afternoon. 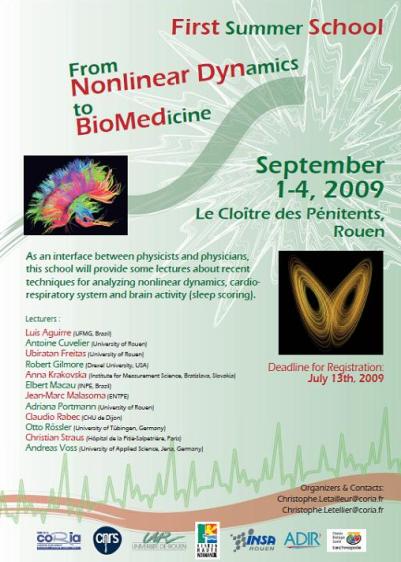 We will try to give the opportunity to each participant to present his own works when it is related to the topics of this school.

This school will be held at Le Cloître des Pénitents - 8, allée Daniel Lavallée - 76000 ROUEN - close to the city center.

Poincaré pointed out the proper direction more than a century ago : follow the periodic orbits. This advice provides a key to our understanding of three-dimensional chaotic dynamical systems. Periodic orbits provide the proper instrument for both the classification and the analysis of chaotic behavior...

In laboratory settings, polysomnography may be used to monitore and evaluate sleep. The ElectroEncephaloGraphic (EEG) activity is the core of the multivariate measurements. But to interpret de polysomnography, it is required to have a know-how...

The complex system of the brain can be studied from single neurons to large neuronal networks. Although a convincing demonstration of chaos has only been obtained at the level of neurons acting as coupled oscillators, some scientists still believe that there could be considerable benefits for the brain...

Identifying chaos from experimental data, that is, from data contaminated by noise, remains a very challenging problem for which conclusive arguments are still very difficult to provide...

Biomedical dynamics as those underlying the cardio-respiratory system are fluctuating more or less regularly. They are aperiodic, bounded and possibly sensitive to initial conditions. But very little can be said concerning the existence of an underlying determinism...

Lung ventilation depends on the phasic contraction of the respiratory muscles. Like the heart, these muscles contract cyclically and automatically all life long, even during sleep. In contrast to the heart however, their command is not intrinsic but extrinsic, located in the central nervous system. The respiratory muscles deform the thoracic cage that in turn changes the pleural pressure and mobilizes the lung gas. Expiration results from an increase in the alveolar pressure, above the atmospheric pressure. Inspiration, on the other hand, depends on a negative pressure swing in the thorax and in the alveoli. This fall of pressure could lead the soft pharyngeal walls to collapse if the dilator muscles of the upper airway would not contract...

positive pressure ventilator and its major objective is to improve alveolar hypoventilation and subsequent arterial blood gases, especially PaCO2. NIV should be distinguished from continuous positive airway pressure (CPAP) which is a validated treatment for obstructive sleep apnea syndrome. CPAP is not a ventilatory technique since it does not modify the alveolar ventilation and does not reduce PaCO2 in hypercapnic patients.

Gilles Deleuze reportedly jumped out of the window because the artificial respirator became unbearable to him. Machines that sense and act forcefullyy can be a bad dream. This field of medicine is at the cutting edge of a new development if humankind is allowed to continue a bit longer. The Rouen chaos school has established a pioneering cooperation with techno-medicine. So physics came back under the influence of the Hippocratic oath - which is a highlight in itself. Chaos theory is simple despite being 3-dimensional. Three-dimensional thinking - in pictures of returning trajectories as in the phase diagrams of the respirator-plus-patient dynamics - is unusual in science but well-known in surgery, for example...

This talk will provide a brief overview of Brain-Computer Interfaces from a signal processing and machine learning perspective. Then we discuss in more details the components of data analysis chain employed in a P300 based BCI speller.

Sleep entails a profound alteration in human physiology. And as many other physiological functions, ventilation is profoundly modified by sleep. The body position, the control of breathing the airflow resistance, the ventilatory response to loading and the synchronization of the respiratory pump muscles between them...

Cardiovascular diseases are the major cause of death in our country. Currently, a main ally to the realization of the pathophysiology studies of biological systems in the field of heart diseases is the technique known as the heart rate variability (HRV). However, the HRV has a complex behavior, making it difficult to identify patterns of specific diseases...

Probably the most common way of understanding a problem is by observing data - that may come in the form of pictures, images, plots, tables, list of numbers and so on - and trying to make sense out of them. This "making sense out of data" is mainly an effort to establish some sort of structure within the data or, in other words, to develop some type of model for the data. Of course, the structure searched for and the resulting models strongly depend on the nature of the data...

In many fields of science, experimental data produced by nonlinear dynamical systems exhibiting chaotic behaviour have most often the form of a single scalar variable time series sampled at regular intervals. Such scalar time series, are therefore the only way to get information about the chaotic system under study. A challenge is to obtain simplest phenomenological models that are able to reproduce observed dynamics...

Multiple Sclerosis cannot be defined easily, undoubtedly due to the variety of its forms. Though this disease remains one of the most common neurological diseases among young adults. This preliminary study deals with the prediction of the Expanded Disability Status Scale usually used to quantify the handicap among Multiple Sclerosis patient. It takes into account the functional parameters and the ambulatory capacities of the patient collected during the posturometry test. This analysis shows that the non-linear approach turns out to be far more effective to classify patients according to the degree of the disease...

The full abstracts of invited speakers can be downloaded here.

Take the metrobus to Boulingrin station. Then take "Avenue de la Porte des Champs" up to "Rue Orbe" that you will take on your left. Then once you reach "Place de la Croix de Pierre", follow "Rue Saint-Hilaire" (slightly on your left). After 200-300 m, you will find "Allée Daniel Lavallée on your left. Take it. On your right, you will have "Le Cloître des Pénitents". 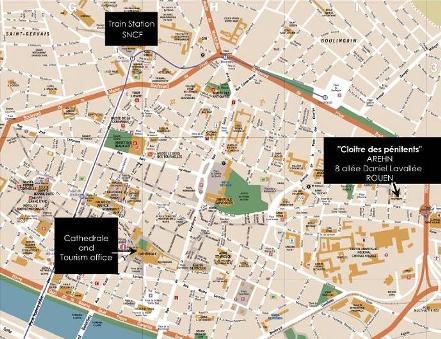