Edward N. Lorenz, a meteorologist who tried to predict the weather with computers but instead gave rise to the modern field of chaos theory, died Wednesday at his home in Cambridge, Massachusset, from a cancer. He was 90. 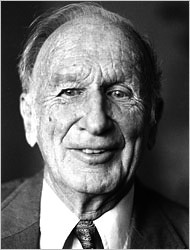 Dr. Lorenz was not the first to stumble onto chaos. At the end of the 19th century, the mathematician Henri Poincaré showed that the gravitational dance of as few as three heavenly bodies was hopelessly complex to calculate, even though the underlying equations of motion seemed simple. But Poincaré’s findings were forgotten through the first three-quarters of the 20th century.

“When it finally penetrated the community, that was what started people to really start to pay attention to this and led to tremendous development,” said Edward Ott, a professor of physics and electrical engineering at the University of Maryland. “He demonstrated a chaotic model in a real situation.”

Born in 1917 in West Hartford, Conn., Edward Norton Lorenz received a bachelor’s degree in mathematics from Dartmouth College in 1938 and a master’s degree in math from Harvard in 1940. He worked as a weather forecaster during World War II, leading him to pursue graduate studies in meteorology; he earned master’s and doctoral degrees in meteorology from the Massachusetts Institute of Technology in 1943 and 1948.

Excerpt from the New York Times article by KENNETH CHANG published on April 17, 2008. The full article is available here