Recurrence plots were first introduced to quantify the recurrence properties of chaotic dynamics [1]. A few years later, the recurrence quantification analysis was introduced to transform graphical representations into statistical analysis [2]. Among the different measures introduced, a Shannon entropy was found to be correlated with the inverse of the largest Lyapunov exponent. The discrepancy between this and the usual interpretation of a Shannon entropy has been solved by replacing the probabilities

’s used in the entropy formula

The key point is to replace

increases as the bifurcation parameter increases (as shown for the Logistic map in Fig. 1b). There is a one-to-one correspondence between the new definition of

and the positive largest Lyapunov exponent. 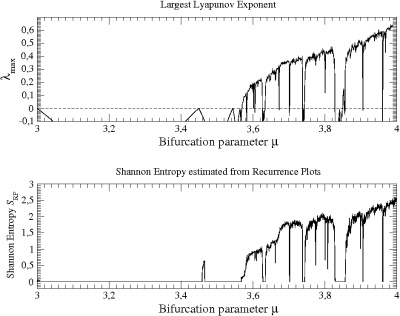 Fig. 1 : Comparison between the Largest Lyapunov Exponent and the Shannon Entropy.

Estimating the Shannon entropy for the Logistic map

. It produced Fig. 1. It is also possible to add noise.

A second Fortran code is provided. It computes the Shannon entropy using a recurrence plot from a data file. you have to specify the number of data point (Npoint). Your data file is expected to have a single column. The code returns

Be aware that the so-called "determinism" rate does not provide in fact a determinism rate for the simple reason that, for instance, it is equal to 0.82 when estimated from a time series produced by the Logistic map with

, a signal which is 100% deterministic ! So, please, interpret with great care this rate. Note also that, for flows, it is definitely better to compute recurrence plots from a "discrete" time series recorded in the Poincaré section of the attractor than from a "continuous" time series. This is discussed in Ref. [3].

Fortran code for the Shannon entropy from data file

Estimating the Shannon entropy for the Logistic map